During the 12 months ending in June 2021, consumer prices shot up 5.4%, the highest inflation rate since 2008.1 The annual increase in the Consumer Price Index for All Urban Consumers (CPI-U) — often called headline inflation — was due in part to the "base effect." This statistical term means the 12-month comparison was based on an unusual low point for prices in the second quarter of 2020, when consumer demand and inflation dropped after the onset of the pandemic.

However, some obvious inflationary pressures entered the picture in the first half of 2021. As vaccination rates climbed, pent-up consumer demand for goods and services was unleashed, fueled by stimulus payments and healthy savings accounts built by those with little opportunity to spend their earnings. Many businesses that shut down or cut back when the economy was closed could not ramp up quickly enough to meet surging demand. Supply-chain bottlenecks, along with higher costs for raw materials, fuel, and labor, resulted in some troubling price spikes.2

CPI-U measures the price of a fixed market basket of goods and services. As such, it is a good measure of the prices consumers pay if they buy the same items over time, but it does not reflect changes in consumer behavior and can be unduly influenced by extreme increases in one or more categories. In June 2021, for example, used-car prices increased 10.5% from the previous month and 45.2% year-over-year, accounting for more than one-third of the increase in CPI. Core CPI, which strips out volatile food and energy prices, rose 4.5% year-over-year.3

In setting economic policy, the Federal Reserve prefers a different inflation measure called the Personal Consumption Expenditures (PCE) Price Index, which is even broader than the CPI and adjusts for changes in consumer behavior — i.e., when consumers shift to purchase a different item because the preferred item is too expensive. More specifically, the Fed looks at core PCE, which rose 3.5% through the 12 months ending in June 2021.4

The perspective held by many economic policymakers, including Federal Reserve Chair Jerome Powell and Treasury Secretary Janet Yellen, was that the spring rise in inflation was due primarily to base effects and temporary supply-and-demand mismatches, so the impact would be mostly "transitory."5 Regardless, some prices won't fall back to their former levels once they have risen, and even short-lived bursts of inflation can be painful for consumers. 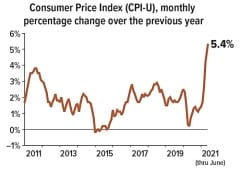 Some economists fear that inflation may last longer, with more serious consequences, and could become difficult to control. This camp believes that loose monetary policies by the central bank and trillions of dollars in government stimulus have pumped an excess supply of money into the economy. In this scenario, a booming economy and persistent and/or substantial inflation could result in a self-reinforcing feedback loop in which businesses, faced with less competition and expecting higher costs in the future, raise their prices preemptively, prompting workers to demand higher wages.6

Until recently, inflation had consistently lagged the Fed's 2% target, which it considers a healthy rate for a growing economy, for more than a decade. In August 2020, the Federal Open Market Committee (FOMC) announced that it would allow inflation to rise moderately above 2% for some time in order to create a 2% average rate over the longer term. This signaled that economists anticipated short-term price swings and assured investors that Fed officials would not overreact by raising interest rates before the economy has fully healed.7

In mid-June 2021, the FOMC projected core PCE inflation to be 3.0% in 2021 and 2.1% in 2022. The benchmark federal funds range was expected to remain at 0.0% to 0.25% until 2023.8 However, Fed officials have also said they are watching the data closely and could raise interest rates sooner, if needed, to cool the economy and curb inflation.

Projections are based on current conditions, are subject to change, and may not come to pass.

Content provided by Forefield for use by Eliot M. Weissberg, CFP®, CFS, of Raymond James Financial Services, Inc., Member FINRA/SIPC. The Investors Center, Inc. is an independent company. The information contained in this report does not purport to be a complete description of the securities, markets, or developments referred to in this material. The information has been obtained from various sources considered to be reliable, but we do not guarantee that the foregoing material is accurate or complete. Any opinions are those of Eliot Weissberg and not necessarily those of RJFS or Raymond James. Expressions of opinion are as of this date and are subject to change without notice.

This information is not intended as a solicitation or an offer to buy or sell any security referred to herein. Past performances may not be indicative of future results. You should discuss any tax or legal matters with the appropriate professional.

Raymond James financial advisors may only conduct business with residents of the states and/or jurisdictions for which they are properly registered. Therefore, a response to a request for information may be delayed. Please note that not all of the investments and services mentioned are available in every state. Investors outside of the United States are subject to securities and tax regulations within their applicable jurisdictions that are not addressed on this site. Contact your local Raymond James office for information and availability.